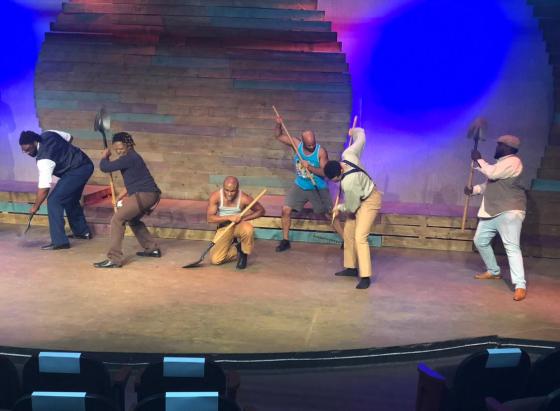 By Johnakeshia Thompson and Brett Raynor

A Jacksonville Beach-based theatre company is striving to create an exceptional experience for locals and tourists with an interest in Broadway plays.

Players by the Sea is a local theatre group that was founded over 50 years ago. This tight-knit group of theatre lovers is thriving off the community with their constant sold-out shows. The Players, as they refer to themselves, have managed to find new and innovative ways to keep audiences coming back. They put on unique shows, and heartfelt performances.

The Player’s production manager, Jereme Raickett, has certainly noticed how much better their productions get throughout each season.

“Over the years, from season to season, we’ve noticed a growth in the talent level that comes in,” said Raickett. “We’ve noticed how our imaginations grow with each show over time, and that keeps us motivated to be as clean as possible.”

According to Raickett one of the things that he looks for when casting actors for a play is their individuality. He looks at the actor’s personality and how they will make the play their own. Raickett also says that each play goes through a two-month screening process, and that a Players by the Sea production is very intensive. As soon as one play is on stage, two more are in rehearsal. In the world of theatre, multi-tasking is key.

“It’s tough being a production manager because of the multiple shows,” said Raickett.

According to numerous cast members, during production many of the Players members don’t have a lot of time to have anything that resembles a social life. They say it’s true that they “live, eat and sleep theatre.”

“We are ‘team no sleep,’” said cast member Kristal Stallings. “I have two teenagers at home and I live over a half hour away from here.”

According to Stallings, they were up about six, or even seven days a week, and that they rehearsed so much that it was not uncommon for them to wake up singing the music for the show.

Because of their intense practice and dedication, the Players are always ready to go at the time of curtain call, and they hope the audience is too.