A little boy’s spirit is the inspiration behind a new inclusive playground being built here in Jacksonville that will eliminate barriers for children with special abilities.

Henry Kruck was born with a rare chromosome disorder that caused him to have congenital defects. 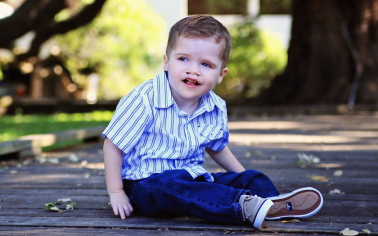 “He specifically was born with a cleft lip, a heart defect, epilepsy and cognitive and development delays,” said Henry’s mom Rebecca Kruck.

His parents struggled to find a playground for him to play and just have fun on, since Henry used a wheelchair to get around. Many pieces of playground equipment were either not accessible to him at all, or they were difficult to access.

“There were really no playgrounds around here that were fully inclusive,” said Kruck.

Henry left behind gifts of love and compassion when he passed away in February of 2017 which inspired his mother’s idea to build the inclusive playground while sitting on the floor of Henry’s room preparing ribbons for his memorial.

Kruck says she grieves her son by being productive. Henry’s memorial service was on March 5, 2017 by the end of the month Kruck had met with the parks and recreations department.

Kruck started a non-profit called Henry’s Heroes Jax as a legacy for her son. The organization is building a playground that removes the obstacles that restrict all children from playing together no matter their special abilities.

Jamie Donohue is a mother of three young boys. One of her sons, Timothy, uses a wheelchair as well, and he has a difficult time maneuvering on a playground due to the mulch or soft sand. Donohue says that this park is important. She wants her boys to have a playground where they all can play together.

“Timothy likes to play with his brothers and do all the things that they do. Currently, there’s not a park where I can take him that he can maneuver with his wheelchair through the park and be able to get on the structures,” said Donohue.

Unless you have or know a child with special needs, you probably haven’t considered the difficulties of access to playgrounds for some children. Both Kruck and Donohue said that they never thought about it until after they had their children.

The theme of the new playground is land and sea. It will include traditional equipment as well as accessible equipment. It will also have sensory equipment, like musical instruments and a giant textured whale. This gives children a variety of options to enjoy at the playground.

“It’s not just about accessibility. It’s about getting kids to play together. That’s really what playgrounds are all about,” said Kruck.

The playground is projected to be completed spring of next year. If you would like to make a donation to Henry’s Heroes Jax go to www.henrysheroesjax.org.